3 Actionable Steps To Change Your Life Through Your Thoughts…

“The mind is its own place and in itself, can make a Heaven of Hell, a Hell of Heaven.” – John Milton
What kind of person were you growing up?
Were you confident, popular or self assured?
If so, you were the complete opposite of me…
Me and my friends were called “the trolls under the stairs…” and that was by the teachers.
The closest we came to social interaction was avoiding eye contact with anyone who walked past us.
But I always wanted more.
I always wanted to reach out and talk to new people. To be like the popular kids, never being afraid of what I was going to say or if I was going to look stupid.
They all seemed so confident, so sure of themselves and their ability. I used to wish I could be like that more than anything else.
Fast forward 3 years…
Since those days I’ve had the privilege of working in bars and being a Bartender, PR & Party Host across Europe.
I spent the last few winters working in the alps, skiing and meeting new people and the last few summers working, laying on a beach and partying at night.
And, all of this is possible for ANYONE once they change the thoughts in their head!
But maybe travelling and working abroad doesn’t interest you. It doesn’t matter, whether you want to build your own business, network with new people, apply for a job promotion or even something as small as talking to a sales assistant in a shop (something that used to terrify me).
These actionable steps will help you!

3 Actionable Steps To Change Your Life Through Your Thoughts:

Step 1: Become Your Own Best Friend

How many times a day do you hear a voice telling you that you can’t do something? Or you’ll look stupid? That same voice is in everybody’s head. Always telling you that you’re not good enough for something. But, it takes just as much effort for that voice to say something negative as it does positive.
There’s a quote…
“If you talked to your best friend the way you talked to yourself, would they still be your friend?”
Well, would they?
And if not, doesn’t that say something about all the negative things you’ve been telling yourself?
So, the first step is too start changing that voice in your head. Every time you hear the negative voice, start thinking about what your best friend would say to you instead.
Or your mum or dad.
Remind yourself of their words of encouragement. Sometimes you just need to believe in someone else’s belief in you.

Step 2: Imagine Your Future As Bright As You Can

This isn’t some positive, feel good “just imagine and your dreams will come true”.
What I mean by this is literally sit down, close your eyes and envision where you want to be in the future.
Visualise every minor detail.
Because that is going to be massive motivation for you!
Think about it this way what’s going to make you hungrier: Thinking about that delicious burger you’re going to eat, filled with a mouth-watering, tender patty, crispy fresh lettuce, Camembert cheese and a delicious, ripe, juicy tomato packed between two perfectly toasted buns. Or a bog standard burger?
When you think about where you want to be with as detailed as you can, you’ll get more hunger and motivation to make it happen.

In every situations there are hundreds or thousands of possible outcomes, which outcomes are you focusing on most?
The negative ones or the positive ones?
Like I said earlier, stop focusing all your time on a negative outcome that might happen, and start focusing on the positive outcomes. Believe me, I know this is easier said than done.
I’ve had days where the negative outcome keeps popping into my head. And every time it does, I see it and I choose to let it pass and think about something more positive.
This is a skill that takes time to develop but think about it, that time is going to pass anyway.
Do you want to spend the rest of your life only thinking of the negatives because you don’t have the will power to change your thinking?
And Remember…
Even after all of this, there are going to be times when you still don’t feel good enough.
Or that you can’t do something.
And those are the moments when it’s even more important to just go out and do it.
You need to prove to that voice in your: “No I am good enough, I can do this” and the truth is, even if you don’t make the cut that time, you can be proud of the fact that you took the initiative, you were courageous, you believed in yourself and took a chance.
Just because you didn’t quite make the mark this time, you’ll be damn sure you can make it next time!
Have a great day,
Antonio Tourino
Founder of You Are Your Reality 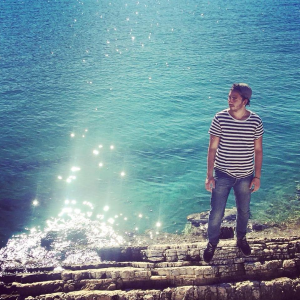